What if you received a box filled with mysterious toys from a fourth spatial dimension?
Playfully explore and marvel at beautiful shapes powered by a groundbreaking 4D+time physics system.
Poke, throw, roll and watch as they disappear into a dimension you can't see.
Get an intuitive feel for how four-dimensional objects behave:
Become a child of the fourth dimension.
In this case the 4th dimension is not time but a 4th dimension of space that works just like the first three dimensions we are familiar with. If you count time these toys are 5D.
It turns out that the rules of how objects bounce, slide and roll around can be generalized to any number of dimensions, and this toy lets you experience what that would look like.

"Our inability to see all the dimensions of a 4-D world doesn't mean that we can't navigate it, that we can't reach out and feel it with our digital fingertips." —Chris Suellentrop, Wired magazine
"I'm hesitant to describe a virtual reality experience as a "killer app" ever again, but I'm oh-so-tempted once more [...] I am not sure that I've ever seen a more compelling "show-don't-tell" educational tool than 4D Toys. " —Sam Machkovech, Ars Technica

Some things to do:

>> More details for those curious about the mathematics

We can describe our universe using three spatial dimensions (x,y,z) and time. These toys exist in a universe that has four spatial dimensions (x,y,z,w) and time. Suprisingly it is possible to generalize physical laws that descibe our universe, such as Newton's Laws of Motion, to any number of dimensions. To do this we had to come up with new mathematics. So for example, forces are four-dimensional vectors, objects rotate around planes instead of axes, etc...
While the computer does not care how many dimensions there are (it is still just working with numbers), because our universe has only three dimensions of space, we chose to represent these objects by taking a "three-dimensional" slice of them. This means that while the objects are fully 4D, only three dimensions are shown at any moment. A slider lets you move along the fourth dimension.

Near the beginning of Miegakure's development, someone joked I should make a 4D physics engine. Then a few years ago I had gathered enough knowledge that it was a possibility. So I made one for fun, and kept working on it on the side. I had a ton of fun inventing the math for it.
I was only planning to use 4D physics a little bit for Miegakure as a purely aesthetic component, but I started thinking about making a stand-alone toy to play with 4D objects, to take full advantage of the physics. At first it was going to a simple dice simulation but I kept adding new shapes... and it got out of hand.

4D Toys doesn't take you through carefully-constructed successively harder challenges the way a "puzzle-platformer" might. It's just 4D shapes, as if you were a very young kid again and given a box of wooden toys. Play is undirected... we don't expect a child to come up with verbal realizations of what they are doing. They can learn about making stacks, and gravity, and fitting shapes into holes, and that can form the foundation for future learning. Alternatively, one can just look at how pretty it is, like the waves rolling down the ocean or the intricate swirling patterns in a fire.
Most representations of a fourth dimension are so abstract (a spinning bundle of lines) and my work has been to get away from that. It's the first time anyone has seen these objects as physical objects that bounce and roll and can be grabbed! 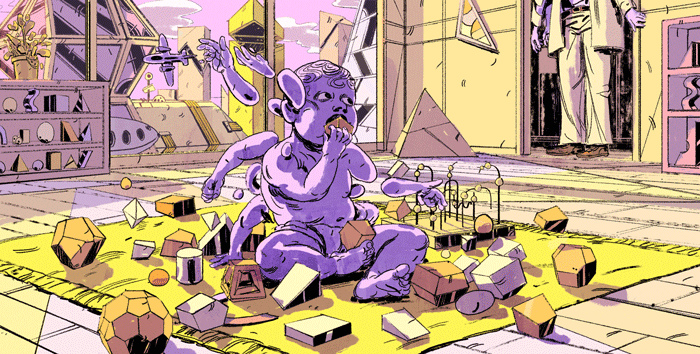 "Meanwhile, in the adjoining room, Emma was sliding the beads to and fro in the abacus. The motions didn't seem so strange now. Even when the beads vanished. She could almost follow that new direction—almost—"
—Lewis Padgett, Mimsy Were the Borogoves